All you need to know about Moon – Lunar Phenomenon

This is the time when the Moon is in its orbit such that the side facing towards Earth is not lit up by the Sun. After this moon phases starts from 1 till next new Moon. You cannot see new Moon. To learn about Moon phases please see below:

Full Moon occurs every month and is a period when Full Moon is on the opposite side of the Earth to that of the Sun. Full moon is the 14th day of the Moon. From observation point of view, Full Moon reflects the most light compared to other phases and the Full Moon shows very less or no craters on the Moon.

Super Full Moon is the Moon when it is seen the largest in size about 12% bigger than normal. It happens once, twice or thrice in a year. This happens because Moon’s orbit is not circular and the distance between the two extreme points on the orbit is not same from the surface of the Earth. This is also called perigee. If you are interested in learning about the science behind it please visit Moon Apogee and Perigee.

Like there is a biggest Full moon, there exists the opposite that is the smallest Full Moon. The Full Moon looks smaller than normal during that period. The between moon and earth is longest so Moon looks smaller than normal. The astronomical term for this is Apogee. If you are interested in learning about it more, please visit Moon Apogee and Perigee. 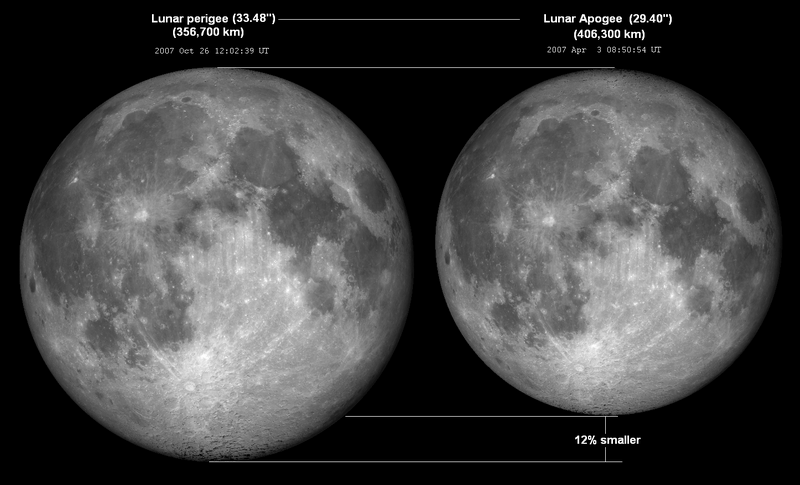 Metaphorically, a “blue moon” is a rare event, as in the expression “once in a blue moon”.

There is a Red moon which is actually reddish (orangish). In Blue Moon, the Full Moon is not actually “blue”. But in Red Moon the Moon is red. It happens due to atmospheric conditions. If it is happening in one city doesn’t mean it is happening in the neighboring city. Whether it is a quarter moon or crescent or Full moon, red moon can appear in any phase. Moon is also red when it is in the Totality during a Total Lunar Eclipse.

Wait.. There are other moons Harvest Moon, Hay Moon…. and so on

A video from space.com shows the science behind the Full Moon and the Full Moon related phenomenons. Enjoy the short video. It will increase your knowledge about Full moon.

A lunar eclipse is an eclipse which occurs whenever the moon passes behind the earth such that the earth blocks the sun’s rays from striking the moon. This can occur only when the Sun, Earth, and Moon are aligned exactly, or very closely so, with the Earth in the middle. Total Lunar eclipse occurs more frequently than Total Solar Eclipse. In 2011, Pakistan was lucky to witness 2 TLE, once in June and second one in Dec 2011. There are other types of Lunar Eclipse as well such as partial lunar eclipse. Partial lunar eclipse happens almost every year.

Earth shine on the Moon

Sometimes shortly after sunset or before sunrise, the unlit part of the crescent glows as seen in the photo below:

The waning crescent Moon on 1st Dec 2013 just before the Sunrise at Kalri Lake, Pakistan. Photo by Author.

This happens 1-5 days before or after the New Moon. One can see the light glow on the dark side of the Moon during a crescent phase. This is called Earth Shine. Earth Shine on the Moon. Cropped photo of the above photo. By Author.

Big Moon on the horizon – An optical illusion

Commonly said as the optical illusion when the Moon (usually Full Moon) is rising from horizon and seen with a foreground object such as a building, the Moon looks bigger than normal. It is not big in actual but just an optical illusion. You can see a lot of discussion going around on this topic.

Far side and the Dark side of the Moon

Moon has a near side which is faced towards Earth and the side that we always see. This is called the near side. All the photos that I have shared are of the near side. The other side is the far side because it is on the far side and we cannot see it. Never we can see it. Dark side of the moon is the night part of the Moon but it is not the far-side. The dark side is the area which is facing towards us but we cannot see it as it is dark due to absence of Sun light there. If you look at the above photo “Earth Shine”. The unlit part is the dark-side and we can only see it due to the Earth shine phenomenon. We cannot always see it. So don’t confuse dark side with far side, they both are different.

“A 22° halo is a halo, one type of optical phenomenon, forming a circle 22° around the sun, or occasionally the moon (also called a moon ring or winter halo). It forms as sunlight is refracted in millions of randomly oriented hexagonal ice crystals suspended in the atmosphere. The halo is large; the radius is roughly the size of an outstretched hand at arms length.” I have witnessed this phenomenon myself back first time in 2009 and then later in 2012 and 2013 in Karachi. If you are interested to know more about Moon Halo, please visit Moon Halo.

One might see an outline around moon on some nights just as in the following figure and sometimes at times when there are too many small patches of clouds. This is something that most of the amateur astronomers or enthusiasts don’t know about. Transient lunar phenomena (TLPs) are described as short-lived changes in the brightness of patches on the face of the Moon. They last anywhere from a few seconds to a few hours and can grow from less than a few to a hundred kilometers in size. I haven’t seen it myself yet but observations have been done and shows that if you look Moon through a telescope for long period of time, maybe a few minutes or hours.

Moon is dead as there is no activity on the Moon. All the activity date back to thousands of years. Meteorites and asteroids used to fall on the surface of the Moon and create craters. The larger impact caused the land to break and lava came out on the surface and cooled down over the period of time which is are in forms of Oceans, the grey/black patches on the Moon.

CI have been interested in observing Moon and photographing it. Craters are the lunar feature created by impact of meteorites and asteroids. When they fall on the surface of Moon, they hit hard and a hole is created in the surface.  Once I got an opportunity to photograph Moon using 100ED refractor and Canon DSLR. I was lucky that it was a good day to photograph Moon. Here is a photographic journey to the Moon.

The black patches as described above are the oceans of cooled down lava and all of them have names as well. 🙂 I was able to capture them as well. These patches can be easily captured on Full moon or any other Gibbous phase, but craters are not possible to capture on the Full moon and a day before and after Full moon. I hope you liked the post and I am sure it should have cleared misconceptions and confusions about Moon phenomenons and mysteries. Thank you very much for liking the article and photographs. If you have not watched the video that I have shared, please do now. It is a very short video but gives a lot of knowledge.

If you are interested in learning moon phases, here is a Moon phase simulator that will clear all your concepts of the changing phases of Moon.