The destination is a beautiful place around for astronomy 100Kms far from Karachi. The destination is somwhere in Mirpur Sakro, Sind, Pakistan where there is a lovely landscape and awesome dark skies. We had with us Meade Schmidt Cassegrain Telescope 8inch, Sky Watcher’s 6inch f/8 dobsonian.  The surroundings of the location were filled with small lakes, birds and most importantly dark sky at night with perfect clear sky where one can easily see the Milky way with naked eye, where one can easily see the Andromeda galaxy with naked eye.

We left around 2:30pm and reached at the destination around 5pm. There were around 40 people with 25 people in Coach, one family in car and other passengers in 2 SUVs.

The moment we reached there we were welcomed by many types of birds flying here and there. There were ducks, chickens and roasters near the site. Everyone started to capture the birds and the Sun Set.

The Sun sets behind the trees

The white ducks before going to their home

Ducks enjoying the chilly evening and yes they welcoming us too

Since the major part of the trip was Astronomy over the night along with photography, we informed the participants to observe the planets  and galaxies with the telescopes. We had with us Meade 8″ SCT, and Sky Watcher 6″ dobsonian.  Mr. Khalid Marwat, owner of Meade SCT started to set up the telescope. The Sun was already set and the telescope was also set. Our first target was Venus and so the participants were asked to form a queue and observe Venus one by one with the Telescope. The Meade 8″ SCT is an electronically controlled telescope, that once aligned with the North Star “Polaris“, keep track of the object in view. It also has a database of the galaxies, nebulaes and star clusters so you can just tell select the object and moving to the target is Telescope’s job. 🙂

The 8inch is the aperture of the telescope objective lens and the focal length is FL=2000mm with a f ratio = f/10. For a photographer (DSLR owner), you can imagine what 2000mm focal length can do. 🙂 The 8inch aperture means the amount of light it will capture is tremendous as compared to a 6inch or a 2inch aperture lens.

Mr. Khalid Marwat setting up the telescope. Photo by Author.

Helping with telescope set up. Photo by Ramiz Qureshi.

The other telescope was the Sky Watcher’s 6″ Dobsonian owned by Zain Ahmed of Karachi Astronomers Society. He took his telescope to a near by ground to avoid the disturbance and light caused by the hut where we 35 people were resting. This was a good idea because we were not disturbed by small amounts of lights, phone lights that went on every now and then.

Setting up telescope for Venus. Photo by Author.

Venus and the Meade 8″ SCT. Photo by Author.

Remember I told you there was another ground where we set up 6″ dobsonian. In order to go there you take a 500m way or a shortcut. To use shortcut you have to go from the bridge. Check out below:

The wooden bridge. Photo by Author.

We all were hungry and the food was ready by 8pm and we were waiting for it eagerly. Finally the food was served, hot with fumes garma garam Chicken Biryani. We enjoyed the garma garam biryani under the starry sky and cold. I must mention that it was 9 degree Celsius at that time. At late night, the temperature reached 5 deg Celsius and few of the participants were not prepared for the cold.

“A picture tells more than a thousand word”. So here are the photos that I captured over the night and you can witness the lovely starry night sky.

Our hut under the Big Dipper. Photo by Author.

Orion and Taurus and the beautiful lake. Photo by Author.

The Milky way and Andromeda Galaxy (m31) setting towards west. Photo by Author.

The cosmos is within us. We are made of star-stuff. We are a way for the universe to know itself.” ― Carl Sagan

My Best Astrophotograph ever! The Orion Constellation my favourite

If you are reading this post, and watching photos carefully you might want to click the below photo. I have tagged the major nebulas that I can see with naked eye in the photo. 🙂 This will help you learn the different Messier in the constellation of Orion. 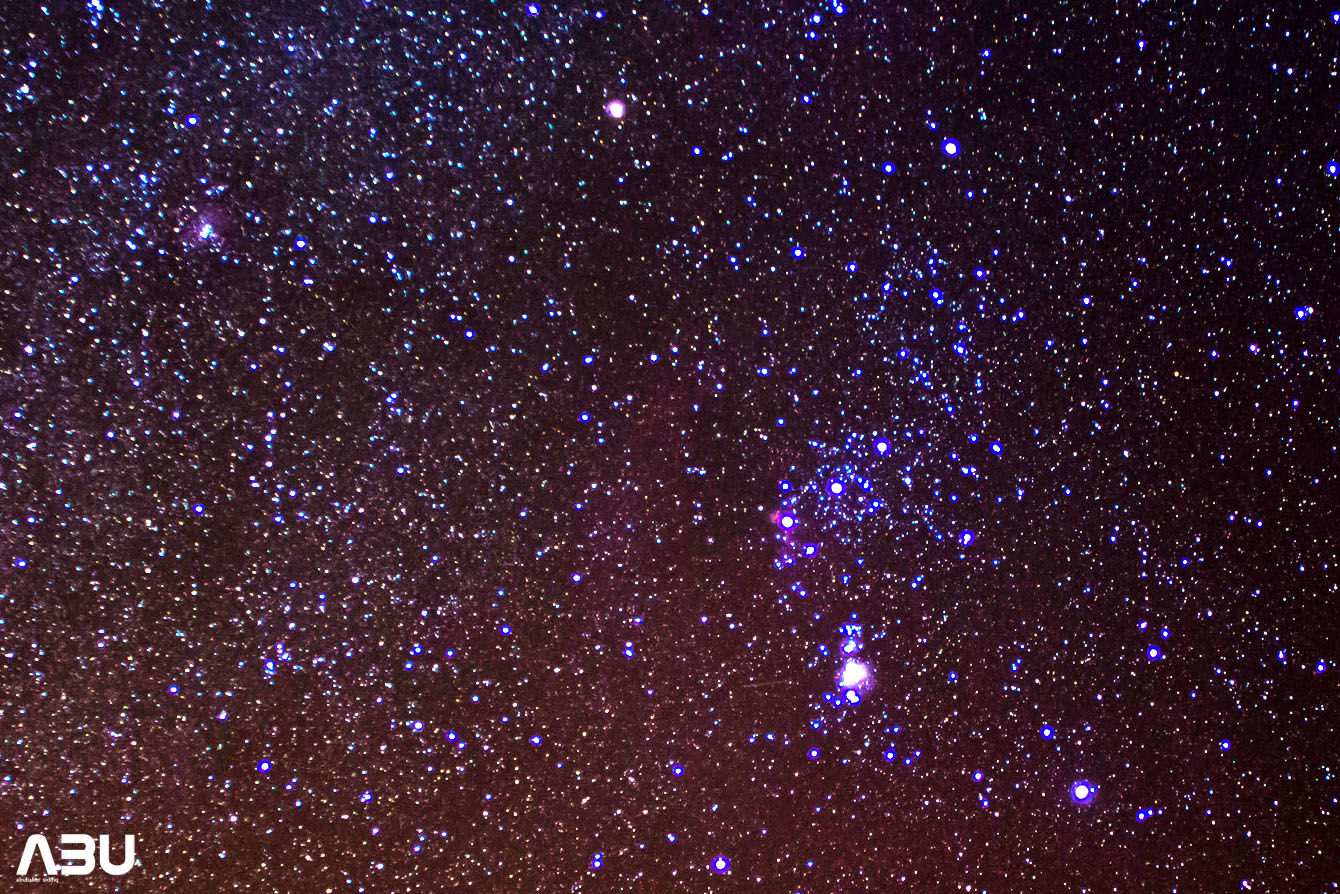 It was around 3 degree Celsius and many of the participants were not prepared for the cold and didn’t bring the required warm cloths. To warm up and to make feel better they did a short Bonfire which we Astronomers didn’t like and it was shutdown after running for about 20minutes.

Warming up in the middle of the night at 3 Degree Celsius. Photo by Author.

It was chilly morning and most of the participants were sleeping with themselves covered with warm blankets. I was up and could feel the cold wind that started with Sun rise. People started to wake up and they stated shooting Sun Set and birds. Breakfast was ready between 8-9am and we enjoyed the garma garam parathas and eggs/onion dish with hot cup of tea. We were given time to capture photos of birds and so many participants with their camera went out for some birds shoot.

The trip at Mirpur Sakro, Pakistan was amazing because of the perfect balance of Astronomy, Astrophotography, and clear and transparent skies. If you liked this article, you will like log of our another truly awesome star gazing astronomy trip at Kalri Lake. Follow me on my Facebook page for events updates and for learning.