My Journey in Astronomy

Since my childhood I am close to nature and that made me a good observer and allowed me to ponder over the existence and the reason of why something is like it is. At age of 12 years, I started to take care of my garden myself. In class 4, I created a volcanic mountain model and types of mountains (shows my interest in Geology) as my social science project. In class 5, I created a model to show Space Shuttle (I sketched NASA space shuttle), and astronaut life in outer Earth orbit. At age of 15 years, I started the art of Bonsai (nature).  In 1995, I went to Ziarat, Quetta, and for the first time in my life saw so many stars in the night sky that I was amazed and thought why we don’t see so many it in Karachi. During my stay there, I saw a foggy whitish cloudy stuff in the sky stretching from one side to the other in the dark night sky. I thought it was fog. But it was not fog. It was something else, something starry and something out of this world.  In 1995 Total Solar eclipse, my dad did not allow me to watch the Eclipse, but I somehow managed to see the TLE moment when it was completely dark though the Window and a projection in the television. I was always attached to Astronomical events.

I didn’t have internet until 2006, not enough books and nothing to search from. No google. No encyclopedia. Daily I go somewhere out, I used to see Moon; sometimes crescent, sometimes gibbous, sometimes full, sometimes a big full moon, sometimes rising behind the buildings reddish Moon. But one thing in common, the same Man face on the Moon. I had a binoculars (3x) maybe, a toy. First time I saw Moon through it and saw the patches (The Mare, the oceans). In 2007, I saw a book of a student at my place lying in my house and started reading it. It was a science book and I checked the Astronomy chapter. That was really interesting. A few days later, I found another book “Stars and Planets” at a bookstore and that opened a new universe for me, a new world of Astronomy. Read it very fast, couldn’t understand constellations and lots stuff. J Stars and Planets – Photo from past. 2008 while packing these books to be given to the faculty members of SZABIST on Night Hawk Launch.

I had internet at my university, so started searching for astronomy clubs or astronomy people in Karachi and Pakistan; couldn’t find any. Still searching, found a yahoo group Amastropak. From that point, I started to learn Astronomy, started to observe the night sky, learn Moon phases, constellations .Alhamdulillah I learned a lot but still very basic knowledge.

In August 2008, some members from Amastropak (Faraz Fazil and other enthusiasts arranged an event to view the partial Solar Eclipse from Karachi. There I met Mr. Khalid Marwat with his 8” Meade Schmidt Cassegrain telescope. For the first time in my life viewed the closest star “The Sun” through telescope. Met Imran Rasheed, Zain Ahmed, Adnan Lawai, Mehdi Hussain, Dr. Akbar Hussain. I witnessed the refractor telescope SkyEye built by Dr. Akbar Hussain. That day was a breakthrough moment. It was a dream came true. Just a year back, I thought I was alone, I thought I was the only crazy person in Karachi that wonders about the heavens above us, I thought I was the only person looking for crazy like me. But that day I found that almost everyone there was finding and looking for people like themselves.

I took many photos of the eclipse, got answers to many astronomy related questions and enjoyed the company of Zain, Imran bhai, Mehdi bhai, Dr. Akbar and Khalid Marwat. This day has another significance as well which I will tell later. 🙂 The journey continued and then Mehdi bhai started arranging astronomy discussion sessions at his office after 6pm. That was really amazing and nice of him. On the other hand, Zain and Imran bhai kept helping me on email and Amastropak group and on phone as well.

In Oct. 2008, I planned to launch an Astronomy society at SZABIST with the name “Night Hawk”. It was my marketing course project as well. I was lucky and found Mr. Khalid Marwat (Owner of Schmidt Cassegrain) at SZABIST when I was about to start the society. We created the proposal and submitted to the university. In short, we had the launching session on 10th Nov 2008, first of its kind in the history of SZABIST and in the history of Karachi Astronomy. Around 100s of students visited us at the rooftop to view the Moon, Venus, and Jupiter with the telescopes. For the first time I saw Binoscope. Imran bhai and Zain were also invited to the event.

Teaser for Night Hawk (Listen to the radio broadcast)

Highlights of the event

Me interviewed by ARY Digital Mr. Khalid Marwat spotted the satellite in the night sky

Night Hawk event coverage on SZABIST 106.6 Radio station – Listen to what visitors are saying about Astronomy

Stargazing in Karachi – by Express Tribune (An Interview by Mr. Farhan Anwar, CEO of Sustainable Initiatives)

We had a session in 2009 when Mars was at opposition at PIA Planetarium and later few other events. Then we met one of the greatest friends of ours, Mr. Naveed Merchant. In the meanwhile, on a regional level, Astronomy scene was ON. And a few enthusiasts started to formalize our Astronomy enthusiasts group with a name. And finally we decided upon Karachi Amateur Astronomers Society (KAAS). Then it was refined to Karachi Astronomers Society (KaAS) and finally in 2009 we formalized the society with a name and a team of core members and an executive body with Mr. Khalid Marwat as the president.

I borrowed 7×50 binoculars from my mamoo back in 2008 and used it for years. Observed Moon, and planets lot of times, and a many star clusters and common DSOs. Photographed Moon using it as well. I returned it Oct. 2013 finally. 🙂 I borrowed binoculars from my uncle. Borrowed a 60mm meade refractor from Imran Rasheed to fulfill my observation requirements. 🙂 In 2009, I got my hands on “Practical Skywatching”, thanks to Zain Ahmed who told me to get this book. Amazing book it is. I learned constellations and a lot of stuff. During those days started to watch the History channel series “The Universe”. After reading the book, I learned that what I saw foggy like thing back in 1995 was the Sagittarius arm of the Milky Way (our home Galaxy), the part of the huge galaxy (~100,000 light years across) visible from Earth. Most of my observation by then was either with the Naked eye or with Binoculars. During KaAS events, I got chance to enjoy observing with telescopes. Thanks to Mr. Khalid Marwat, Mr. Naveed Merchant, Mehdi bhai, Akbar bhai and Imran bhai for the telescopes. Then we had some amazing events at Malir Cantt. Falcon Complex in late 2009.

Being one of the founders of KaAS and a computer science student and a web developer, I offered my services and created a CMS based website for Karachi Astronomers Society. And the website was launched (www.kaasts.com) having Gallery, Forums and Blogs. People can register to the website and can get updates about our events. Thanks to Zain Ahmed Imran Rasheed for helping me out with website content stuff and other related stuff.

I was missing a telescope during my observation when once I messaged Imran Rasheed that I wish I had a telescope. To my surprise he responded that you can take Meade 5.1” 🙂 Wow That was really really nice of him. The very next day he came and dropped the telescope at my place himself. So generous of him. Alhamdulillah. He assembled the scope and showed us the Jupiter. 🙂 Another journey of Moon observation and Astrophotography started from there. I spent nights watching Moon, venus and Jupiter and a few DSOs such as seven sisters through it.

In 2010, Astronomy scene in Pakistan specifically Karachi took a great step. We went outside Karachi for sky watching as we can get darker and clear skies there. And we started our series of Rutjaga. The series of KaAS dark skies trip started in 2010 and I was part of most of them. Those events used to be 2 days and 1 night stay usually camping and under the dark skies and in winters as skies are clear.

A picture or an illustration tells more then writing. Here is a video of the event World Space Week in 2011 compiled by myself  where KaAS participated. Thumbs up to Zain Ahmed who was the coordinator and a bridge between SUPARCO and KaAS. I helped with advertising, and marketing of this event. For the first time, I designed KaAS T-shirts, got them printed and we sold T-Shirts to many enthusiasts.

Check KaAS website blogs section for the logs of our events here. Me and Mr. Naveed Merchant with Meade Lx200

Me with KaAS Team and Naveed Merchant’s Webstars 24″

The year 2013 was an amazing year. Many dreams came true and I am thankful to Allah for the success. I was able to create a 100mm refractor telescope having 1000mm focal length. The telescope created using PVC pipe (used for sewerage).

The lens fitted by myself

First light of the refractor without a tripod Abubaker(me) and Ramiz and observatory KaAStrodome is a private observatory of Karachi Astronomer Society (KaAS) and not yet fully ready. But I got opportunity to help the creators while construction. I was present in the launching ceremony covered by GEO. You can check a short documentary here:

KaAStrodome-Inauguration-covered-by-GEO-News from Abubaker on Vimeo.

I got opportunity to set up the 12 inch telescope and observe through it. Then later on in October 2013 we had  a session there at KaAStrodome. A detailed log can be found on my post A whole night Star Gazing and Astrophotography session at The KaAStrodome. The Great Nebula in Orion

I am always fascinated by the Orion Nebula (m42) and I had a wish to photograph it. Finally I was lucky that I got a chance to photograph M42 from Karachi using a 7inch Maksotuv (Sky-Watcher) and a Canon DSLR. That wouldn’t have been possible without the T-Adapter that reached all the way from Australia (ofcourse not by itself. Dr. Akbar of Karachi Astronomers Society brought it for me). Well to cut it short, I was able to get AWESOME shot that I would like to share. Orion Nebula by Abubaker at KaAStrodome

Orion Nebula (M42) and The Running Man nebula captured by me from dark skies of Sindh, Pakistan on 18th Jan 2015. 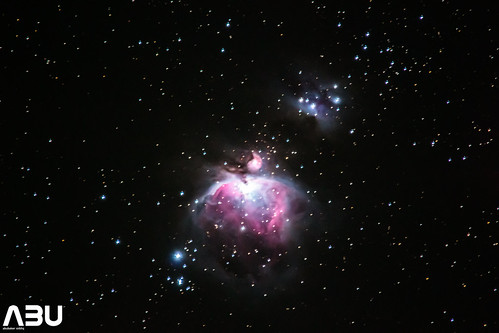 And the journey continues….

I took a few photos of Moon in a Gibbous phase and divided whole Moon into several pieces so that the craters are distributed and one part can be concentrated at one time. It was my wish and objective since I first started Astronomy. The objective was to take photos of Moon myself and mark the craters to learn myself and share it with others so they can learn too. For that purpose I have created a page on my blog where I have tagged the craters on Moon in the photos. Here is the post. Click here 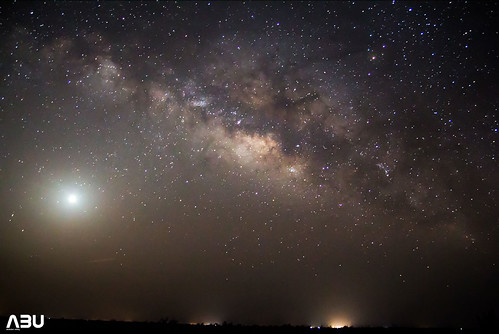