In search of Milky Way and the starry skies of Pakistan

In Dec 2013, I went for an astronomy dark sky session for star gazing in a village in Sindh, Pakistan. That event was a success and I learned a lot of stuff there with regards to Astronomy and Astrophotography. Since then I had been waiting anxiously for another such trip and with me lots of Astronomy enthusiasts were waiting for it. Finally, we decided to arrange an event and I took the lead to organize the event for Karachi Astronomers Society. We started to get a few registrations but by the end, we reached 50 plus people. Wow.

This post is not only restricted to my astronomy experience. It has all the amazing experiences that we had during our trip. If you are interested in only Astronomy session click here.

The journey to destination

We left Karachi in morning so that we can reach the venue at lunch time and do some rest. This was our first and only trip in which we got lot of day time. The journey to the destination was filled with joy and enthusiasm as the participants were excited about Astronomy. We reached there after having lunch at the nearby hotel.

Then we decided to have introduction of participants which is KaAS’s tradition since years. We gathered and one by one we started to introduce ourselves while answering questions name, age, and marital status, how they got interested in Astronomy. It was a nice short session where we got to know each other. We got participants from many interests such as engineering, software, aviation and marketing. This trip was a different and a unique type of event.

We dispersed after the introduction and a few participants went to enjoy the lovely landscape around us and some started to photograph the birds flying around here and there. But there were participants who brought 2 human created birds J They brought toy planes with them. Two different types; one was created and other the ‘parrot’ was bought. The second one had a camera on front and one at bottom for recording and was controlled by a smart phone. We enjoyed the flight of both the toy planes in the windy evening.

Flight of the own created air craft from Abubaker on Vimeo.

We offered Asar prayers and then went to capture the lovely landscape. The Sun was about to set and I love sun set and I like Sun rise, so took a few photos along with my friends who accompanied me as well. We took some great photos of the Sunset. We could see the Sun setting till it touched the horizon at 2 degrees 🙂

Setting up the Telescopes

The 7″ and 8″ are the computerized telescopes that once aligned will track your target object. Why tracking is required? The Earth is rotating and so the sky appears to be rotating from east to west. And so in order to keep observing an object in sky without re-aligning the telescope, tracking helps. Tracking also helps to photography the sky using long exposures greater than 30secs. After 30secs of exposure, the stars will start showing trails.

Setting up the telescopes

Telescope ready to be aligned with North star Polaris

As the twilight sky started to get black, stars started to show up in the sky and we could see Andromeda galaxy by naked eye. Me and a few fellow from KaAS were explaining the night sky to the participants by using our green laser pointers. We showed the participants the North star Polaris, Andromeda galaxy and a few tips about star hopping. We explained them the 88 constellations and the 13 Zodiac constellations. The 13 constellations are Aries, Taurus, Gemini, Crab, Leo, Virgo, Libra, Scorpio, Sagittarius, Capricorn, Aquarius, and Pisces. This is the sequence as well. In order to learn the sequence, there is an easy way that Mr. Khalid Marwat taught me.

If you follow the sequence starting from Aries, you will match the above line to the Zodiac constellations by yourself. 🙂

Our first telescope target was Jupiter and its 4 moons and so all the telescopes were pointed towards Jupiter. I observed Jupiter with 2 telescopes but watched Orion Nebula M42 with all the telescopes 🙂 You might be wondering where is the Moon. Why I didn’t talk about the Moon. Moon wasn’t there the whole day and whole night. This is what is called New Moon. This is the ideal time for observing the galaxies, nebulaes and clusters and most importantly, the Milky Way. Well the Moon is not that bad because depending on the phase it will set as well. If you want to learn about Moon phases and New moon in particular, read my article All you need to know about Moon. Highly recommended for those who don’t know.

Observing and photographing the Andromeda and Orion nebula

Time to do some Astrophography, my favorite. The 7” MCT was ready and I requested Mehdi hussain, the owner of 7” MCT to set the telescope on Andromeda galaxy so I capture the galaxy.

Then we targeted the telescope towards Orion Nebula (M42). I saw the nebula already in Celestron C8 and in 7” MCT, the views were amazing in both the telescopes, however, for astrophotography I selected 7” MCT as it had better tracking capability.

Throughout the night, we all were doing naked-eye astronomy and were capturing photos of the brilliant night sky. By naked-eye astronomy, I mean we just look upwards either standing or lying on the ground and watching the heavens above.

The constellation of Andromeda is being set towards West

Deep Sky Objects are the galaxies, nebulas and star clusters that can be only seen better in a dark sky. Over the night with telescopes we saw about 50 plus DSOs using the telescopes. A few are also visible with naked eye and by using a technique known as averted vision. I saw Andromeda Galaxy (M31) with naked-eye, Orion Nebula (M42) and a few clusters. This time I planned to photograph Andromeda Galaxy before anything else as it was about to set and was going in the light dome of Karachi.

The Andromeda Galaxy. If you cannot spot it click the photo and check the tag.

The Andromeda galaxy as photographed through the telescope. This was taken with a 30sec shutter speed. If we could go to 10 + minutes we can get better details.

The great nebula in Orion (M42) from Pakistan 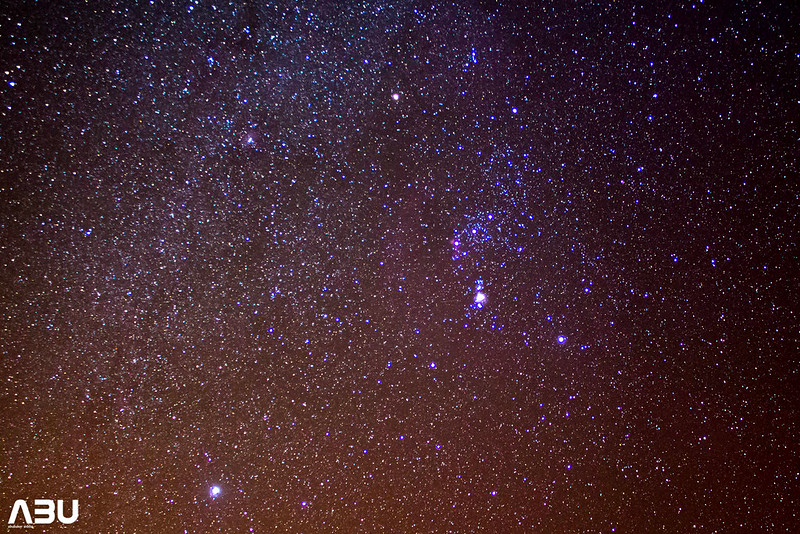 Orion Nebula (M42) visible in the constellation of Orion. Flame nebula, and traces of Horse head nebula are also visible.

My next target to photograph was of course M42, my favorite nebula. After focusing the nebula and with the help of Mr. Mehdi Hussain, I was able to shot the amazing photograph of M42 shown below.

Orion Nebula is a place in the space about 1344 light years away from Earth. Nebula is a place where new stars are born. Light year is the distance light travels from one place to another in 1 year. Light travels at a speed of 300,000,000 m/s. You can imagine how far is this Nebula and here we can see it with our eyes and can capture them with the help of telescopes and digital camera.

We were called for dinner while we were doing astronomy and astrophotography. The lights on the hut were turned on. And we all reached the hut to have the garma garam Chicken Biryani. At dinner we had fun and then we had tea. After that we offered Isha prayers and leave for the place where we had set up our telescopes.

A lovely view of the Taurus constellation about to set.

Observing the Sagittarius arm of the Milky Way galaxy

Around 3:30am I was up and a few participants were also awake because few of them had already slept in evening. I was up the whole day and night and didn’t want to sleep. I was looking at the constellation of Scorpio and was waiting for its tail to rise. I left with 4 other fellows to a far area to do some photography of scorpio. While I was finding a spot I saw the teapot of the constellation of Sagittarius and a thought came into my mind that if Sagittarius is visible, then the that part of the Milky Way galaxy will also be visible and while I was thinking I could see a cloudy and hazy foggy thing towards east. It was definitely Sagittarius arm of Milky way. To confirm I took a shot and boom; this it it. Then we had some great photography with Milky Way and here are the photos.

And we are made of star dust. The Sagittarius arm of Milky way.

The lovely Milky way, our home galaxy over the lake. Milky Way and the blazing Venus

Observing Saturn and the beautiful rings

While I was going back to the telescope site, Saturn was at a favorable position in the sky and so Zain called me and showed me saturn. The lovely planet along with rings and shadows was visible along with one moon.

The lord of the rings – Saturn

It was more than 9 hours we had dinner and now I was very hungry. I didn’t eat junk food while I was up whole night and so hungry and thirsty. Finally the breakfast for 50 people was ready by 8:30 am.

The Astronomers of Karachi, Pakistan

We gathered near the telescope site and arranged ourselves for a wonderful and unique group photo. Here are the group photos 🙂

The Amateur Astronomers of Pakistan at a star gazing session

The sun has gained considerable height and it was getting warm and infact hot while we were standing for the group photo. We had already packed and it was time to leave the lovely and peaceful place and go back to the busy, noisy and light polluted city. 🙂 It was an awesome experience and got to learn a lot about Astronomy, astrophotography, aerodynamics and photography. I will update this post with a few more photos once they are post processed. This was one of the best star gazing trips arranged by Karachi Astronomers Society.