In search of clear skies for Perseids Shower in Pakistan 2016

The Perseids meteor shower is one of the best with average rate of 80 meteors per hour and they are very fast. In Pakistan, the summer season has been quite cloudy since May and the weather is still cloudy with heavy rains during first week of August.

The Perseids peak from 11 – 13 August and it was Friday the 12th, when I took off from office and went with my friend to the North of Karachi into the mountains of Balochistan to seek for a clear sky. The weather was cloudy in whole Sindh and so we were not sure about the weather but we left anyways. It was an impromptu trip finalized on Thursday late night and so we couldn’t gather much public and decided to keep it a private event as there was less probability of clear skies.

A picture speaks 1000 words and a video speaks 1000 pictures 🙂 Here is a video recorded by my friend who was on board with us.

The sky got clear as the night approached and there was 8th night Moon lighting up the sky. Clouds came again and during whole night we got a short span of clear skies. And in that span we observed and counted 50+ meteors and luckily got a few. We even saw meteors from within the thin clouds.

The ultimate surprise was the Irdium flare crossing Cassiopeia and just near Andromeda Galaxy in the morning twilight. 🙂 And yes the sky was clear at that time. Perseid Meteor from Pakistan in August 2016 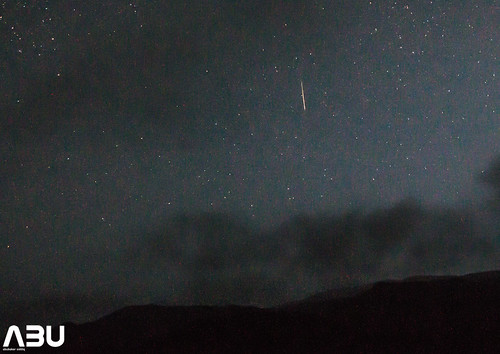 Time lapse of the Perseids meteor shower from Balochistan, Pakistan

It is usually cloudy in August in Karachi and so I didn’t plan to observe the shower. Luckily my friends kept reminding me of the Perseids Shower and then I had to go 🙂 I have observed my first meteor shower during the peak in December 2010 at Kalri Lake. Read it here: Geminids Watch 2010 at Kalri Lake

Keep watching for the upcoming worth observing Meteor Showers that are Orionids and Geminids.